This cheesy Cream Cheese Pasta with bacon & spinach comes together in flat 30 mins. Perfect for quick weeknight meals, lazy weekends or for those unexpected guests! 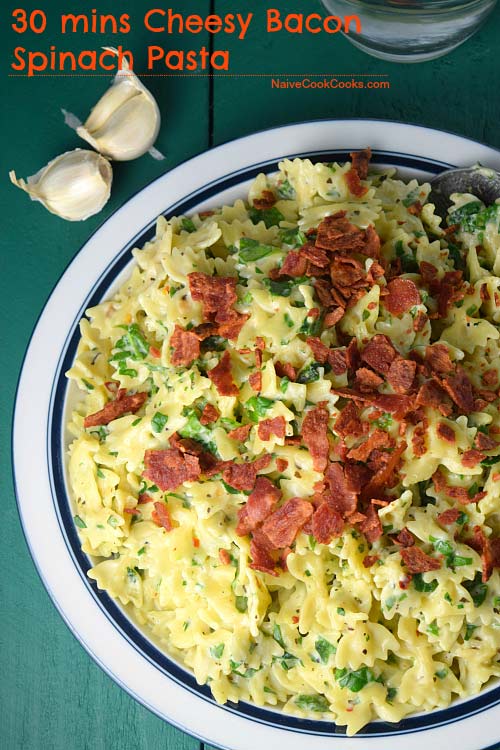 I have a love & hate relationship with bacon.

I know you might think I am crazy. I mean who doesn’t like bacon?! Truth be told, we are not much of  red meat eaters and at times when we get cravings, we opt for turkey bacon. Have you heard turkey bacon is the new bacon in town! Haha who am I kidding! You guys are probably doing it already.

But seriously the first time I tried turkey bacon it was Starbucks’s lunch sandwiches and I loved it. Then there were times when we found ourselves drooling those giant potatoes and egg skillets at brunch places with bacon in it and now since almost everybody carries turkey bacon, we could always swap bacon with turkey bacon and still enjoy all the flavors! 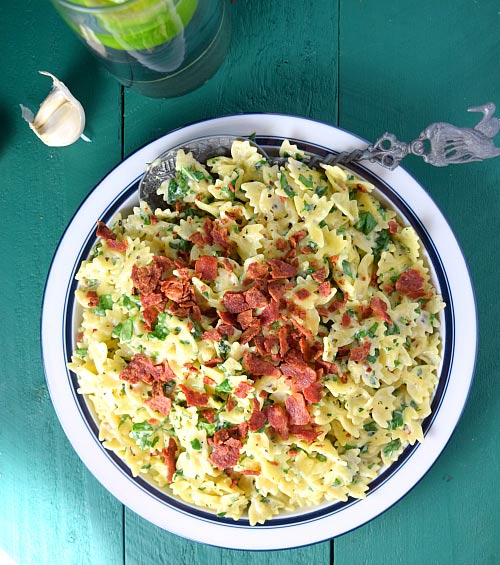 This pasta! Well this pasta turned out seriously delicious but after a giant disaster. I had a giant cauliflower head which I was wanting to incorporate in some way in pasta recipe. I started by turning it into cauliflower rice as I decided to turn it into cauliflower pesto for my pasta but midways (as usual!) I changed my mind and decided to turn it into something mediterranean. I know, as I started adding tomatoes, olives I could sense disaster. When Jerry saw what I was cooking, we exchanged looks and I knew it just won’t work! Off it went to disposer!

But I still had that cooked pasta which needed to be used up and so I went with a simple fool proof sauce made with flour, milk and little bit cream cheese. The best part: The sauce feels so indulgent but it’s ALMOST totally healthy!!

Then I added seasonings, chopped spinach and pasta and LOTS of crumbled turkey bacon on top. It was mind blowing!!

Note for meat & cheese lovers : you can totally leave out spinach if you are going for a simple cheese & bacon pasta.

Make it this weekend.