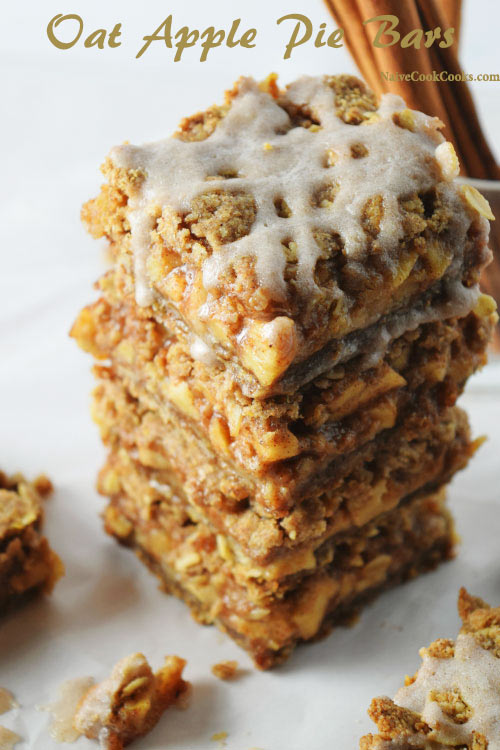 Apple picking season is here and I can’t be more excited! I love going apple picking and bringing back tons & tons of hand picked apples from farms. Those taste way better than apples sold in grocery stores and the possibilities! You can make so many things with those apples. I am already excited for the changing weather and waiting eagerly for all the fall produce!What about you?

I made these OAT APPLE PIE BARS twice in a week just for the sake of perfecting them even though they turned out great the first time. But they were so good & my small batch was all gone the same day, so I had to make more! This time instead of keeping the oats whole, I grinded half of the oats to a fine powder & left half of them whole. It binds the bars better I feel. These bars are packed full of flavor.

If you love eating apple pie but often get scared at the thought of making from scratch apple pies, this is a great recipe! You get apple pie taste and with a oat buttery crust, the crust stays really easy to work with. No chilling the dough! You simply bake half of the oat dough and meanwhile make your apple pie filling, which you then pile up on the baked dough & then finish off with the final layer of remaining dough & bake. The SMELL! Just be warned that your house will smell amazing from all the warm cinnamon flavors! 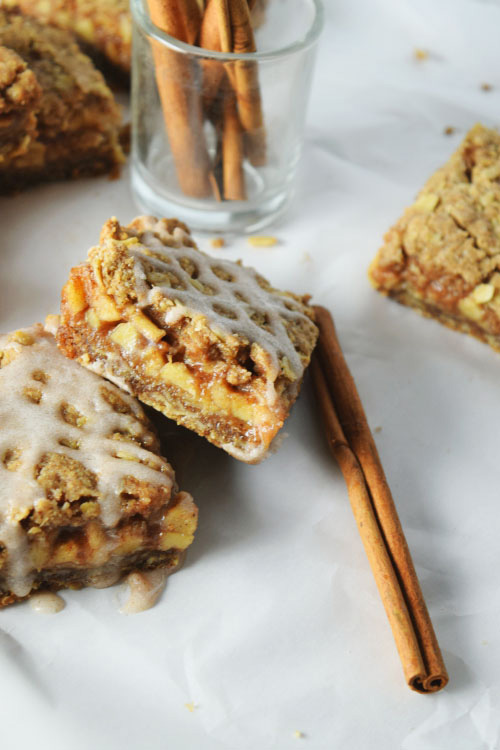 After baking I like to cool them to room temperature and then chill them for few hours before slicing them. This makes for a easier & neater slices and then simply store them in refrigerator! The bars have so much flavor that you really don’t need the cinnamon glaze but for some souls who just can’t live without their glazed desserts like me,this cinnamon glaze is a charm to make. Just 3 Ingredients & 2 mins is all it takes to make this cinnamon glaze!

Now get on with your apple plan!